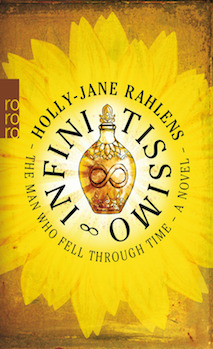 During their English lessons, class 1ES worked on a portfolio project on a very special science fiction novel that takes place in the 23rd century after a pandemic has changed the world as we know it... see here for details and some great examples of what the students accomplished.

I first encountered Holly-Jane Rahlens‘ novel Infinitissimo when participating in the U.S Embassy Teacher Academy “Living in a Digital World” held in Freiburg in 2018.

My 11th graders usually do a partner presentation on a young adult novel of their choice and I instantly considered Infinitissimo – with its unique blend of science fiction and romance plus a lot of humor thrown in for good measure – great “Oberstufe” reading material.

As Infinitissimo additionally holds a special appeal for a German audience since it is set in Berlin in the early 21st and mid-23rd century, I put it right on my “to read with students” list.

When I got my current 11th grade/1e last fall the Covid 19 pandemic had already been determining our lives for half a year. It really seemed like a case of life imitating art as in the novel a virus outbreak in 2029 completely changes the face of the world as we know it. I was a bit worried that reading a novel set in a positive but still somewhat post-apocalyptic future might be a bit too much, but then decided that, on the contrary, such sci-fi reading material was ideal for our own somehow surreal times.

I created a set of fifteen different tasks totaling twenty-five pages, and mixed analytical with creative, as well as cooperative (group and pair work) with individual tasks. The idea was to go beyond the typical classroom setting and have students autonomously read a contemporary novel and develop a deep understanding of it on their own.

The class got time to work on their portfolios for a double lesson each week starting in November. When the schools didn’t reopen in January, most of the weekly English workload was given over to portfolio work for the period between the Christmas and the February holidays. We had agreed beforehand that the portfolios would count as a class test and as a kind of special treat I had organized a video conference with the author (https://www.holly-jane-rahlens.com/home).

After having gotten my students‘ portfolios I was really touched by the great amount of work a lot of them of them had put into their tasks, and also by how personal a lot of the texts such as the letters to the future or to the author turned out to be... many students described how they felt being stuck at home and their worries about the future. Portfolio work always means that as a teacher you have lots and lots of pages to read and correct, but going through the highly individual Infinitissimo portfolios was definitely enjoyable and rewarding.

Holly Jane Rahlens is an American author, actress and producer. She was born in New York and grew up in Brooklyn and Queens. She graduated from Queens College and later moved to Berlin, where she is still living today. What makes her special is that although she writes in English her books get published in German. Her favorite literary genre is fiction and her science fiction novels are for all ages. In 2003 her first novel for teens, Prince William, Maximilian Minsky and Me, earned the Deutscher Jugendliteraturpreis. Holly-Jane Rahlens has also won several other prizes for her books. Infinitissimo – the man who fell through time is her seventh novel. 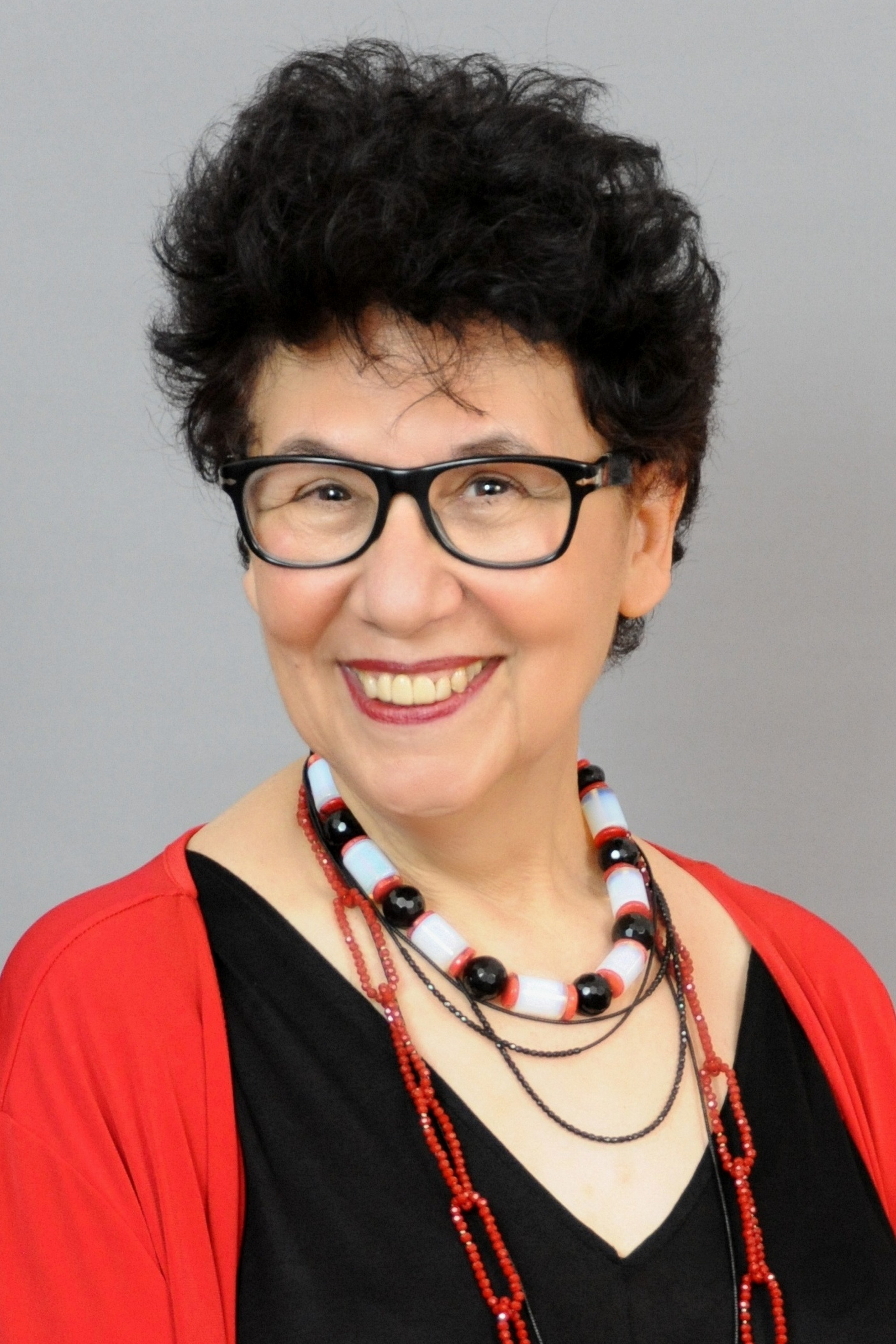 Playing with elements of science fiction, romance and chick lit, Infinitissimo is a novel about a young man named Finn who lives in the year 2264. Together with his friend Rouge he travels through time to early 21st century Berlin and meets his great love, whose diaries he translates from German to English. The girl he’s so fascinated with is called Eliana and is 13 years old when they meet for the first time. Finn has to translate her diaries because they are important to get to know more about the time before the Dark Winter. The Dark Winter happened in 2029, when a virus spread all over the world killing many people. As one of the consequences the German language as well as the culture of handwriting died out. By and by Finn gets fascinated with Eliana and cannot wait to see her again. He has to wait only a few days or weeks to time travel again, but a few weeks in his world are a few years in her world. That’s the reason he gets anxious thinking that she might have forgotten him already…

Our work on Infinitissimo consisted not only in reading the book, but also in completing a portfolio. The folder we had to hand in included no less than fifteen tasks to fulfill (quick reminder: the book has nearly 400 pages), some rather conventional but others more surprising. The summary or comprehension tasks were surely the more tedious, and also to be expected while working on a book, but the creative tasks were much more enjoyable. I personally think the freedom we got to be imaginative and express ourselves following the instructions was really welcomed by the students.

Although it wasn't easy to organize ourselves alone and spread the amount of work over the – we must admit – really long time we were given, I had fun completing some of the tasks. The main difficulty was maybe to start early despite all of the more «urgent» work we had to hand in for other subjects. Therefor it was easy to delay the portfolio until the last minute which was, considering the big amount of work, not the best of ideas.

But to conclude, the important workload taught us to be more organized and we had a chance to experience working in autonomy. 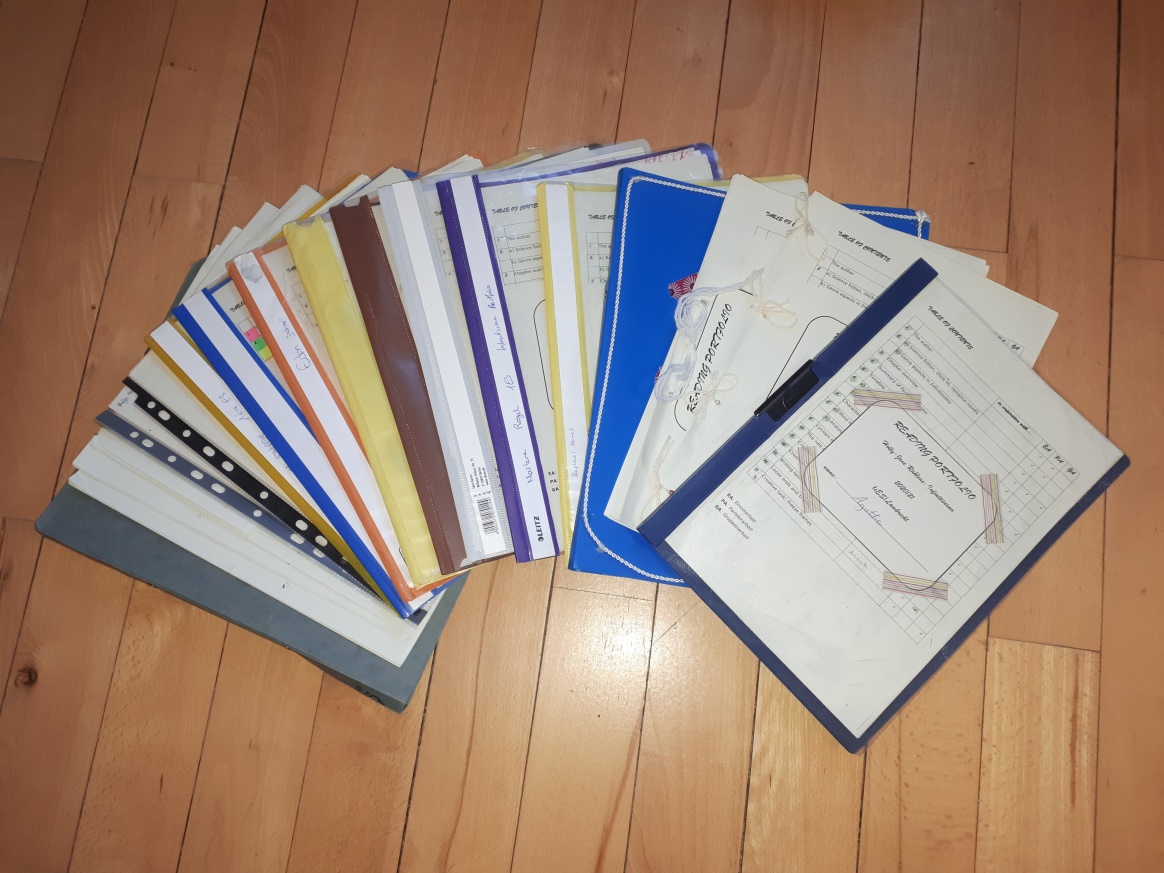 The portfolio consisted of many tasks that were designed to test whether the readers had understood the novel, but also to make them think about it and express their own personality.

Content summaries or characterizations were typical comprehension tasks suitable for group work. However, in order to also challenge creativity, there were tasks that each student had to solve individually. Here, personal feelings or emotions could be expressed. By writing letters to people in the future or choosing gadgets from the book and explaining the reasons why they would like to own them, the student gave their portfolios a personal touch.

We greatly appreciated these tasks and the fact that there were no fixed rules to follow as in an ordinary class. We therefore had a lot of fun and did not lack motivation to work. 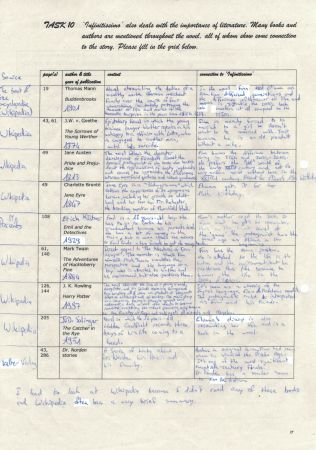 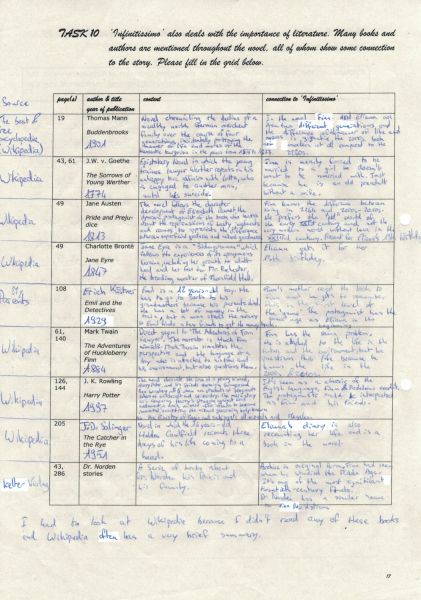 Infinitissimo accompanied our class during a very special time. While we were sitting at home under the pressure and stress of online lessons we had time for ourselves with Infinitissimo. We were obliged to take the time to read a book and work on it. This created short silent breaks in our stressful school lives.

But yes, we did have many tasks to do for the book, fourteen in total. Originally there had been one more but task 15 was about creating freeze frames as a group and making photos of the frames, which we obviously couldn’t do…

The portfolio work was sometimes stressful, but if I really think about it it wasn’t all that hard. It was more comfortable to do the portfolio than the tasks for other subjects. You could intensively engage with a book and its story and the characters. I think after the project I will never forget this novel.

The whole book was like another world while we were sitting at home during the lockdown. An unnatural world. The novel is about the future, which we were thinking about a lot during that time. What would happen next, would there ever be an end to the pandemic? The novel describes a good future and positive times, but also with difficulties like our life. There is so much hope in the story which always reminded us that in such a time as ours we must never lose hope. Despite some difficulties with the tasks, it was a lot of fun to work on the novel and read it.

Our video conference with Holly Jane Rahlens was very interesting. We had prepared questions in our English class that we could then ask on our own. Some students were worried because they felt their English was not perfect, but the author had such a friendly and open manner that you felt comfortable very quickly and had the courage to ask questions.

What surprised me personally was that she was very interested and curious and took her time to answer the questions in detail. This is definitely not easy when you have already had a lot of conversations with students and readers and I found that quite admirable. We learned that it is difficult to find a suitable translator for one's books, as ideas on how to express something often differ widely. Another interesting aspect was that Holly Jane Rahlens doesn't like to class her books as a certain genre, preferring to simply call them literature.

In summary, I can say that it was a very nice and interesting meeting on equal terms and it seemed a bit like a reward after all the work on the portfolio. 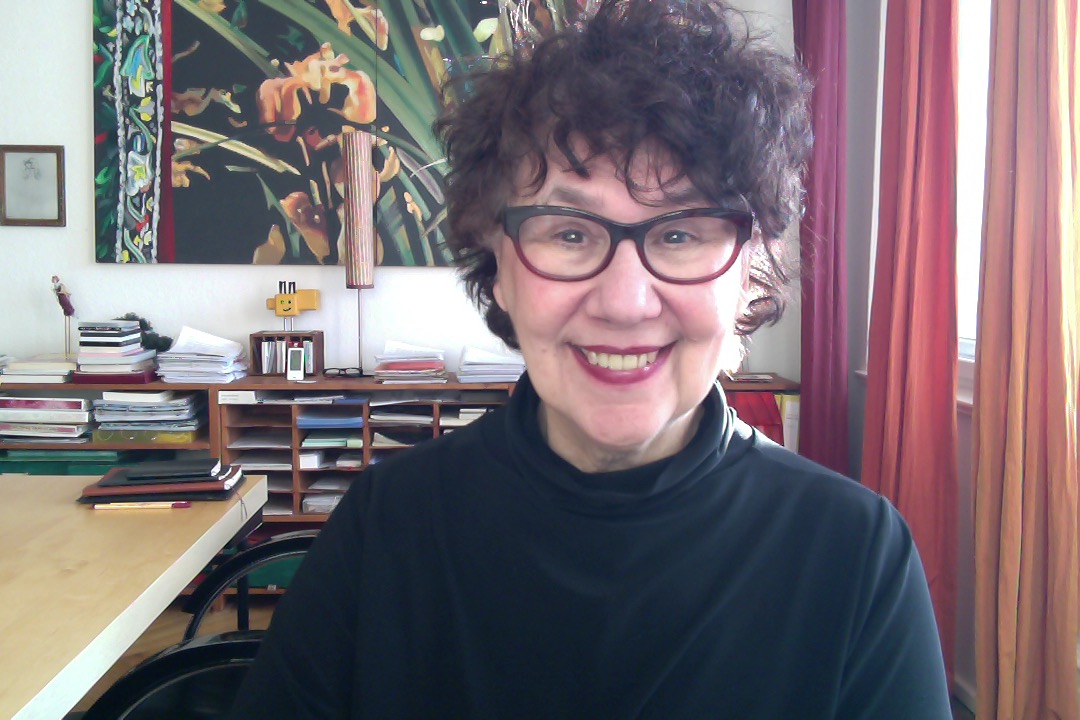