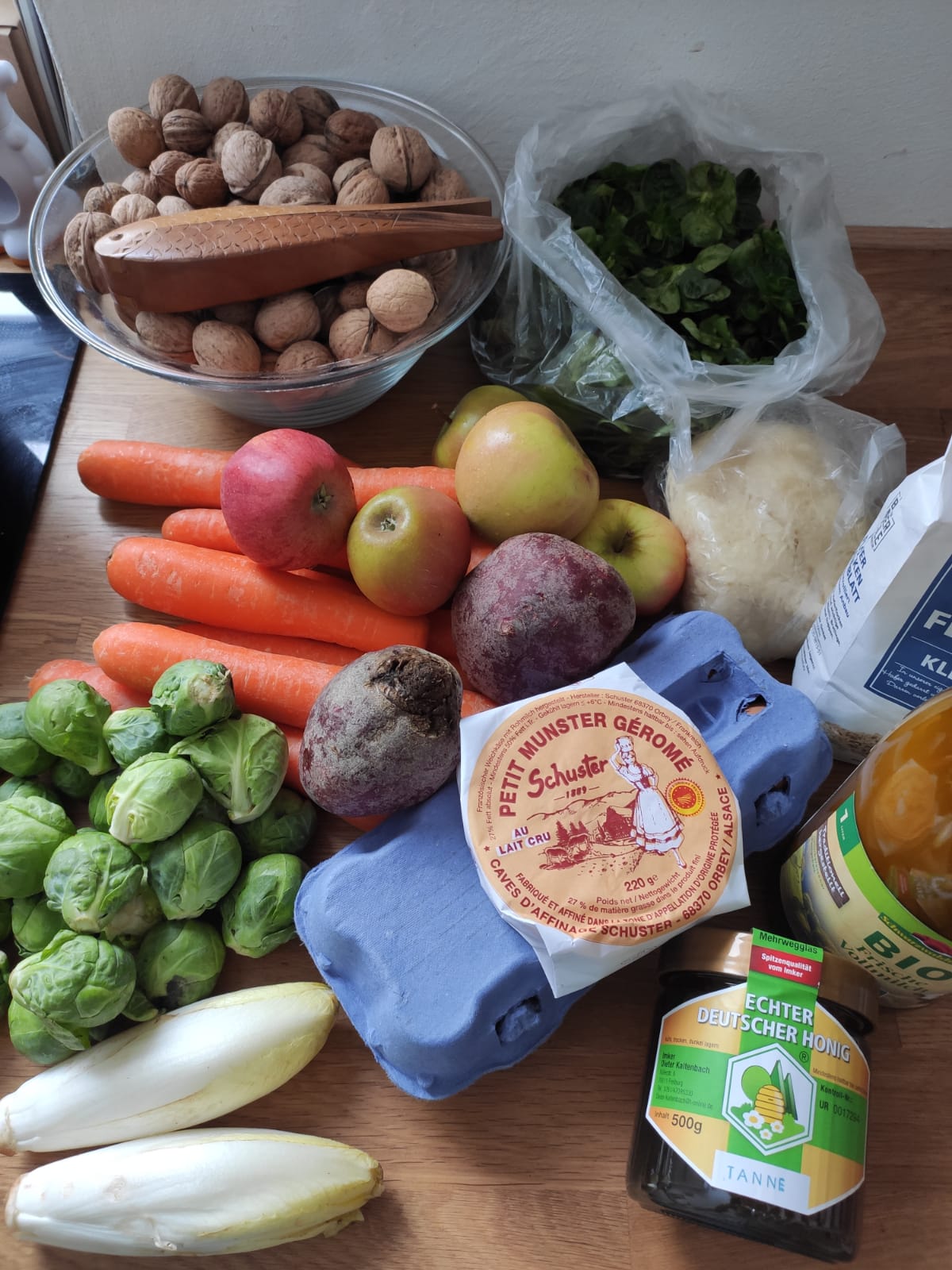 For one week, the T SBC and their English teacher Ms Pink lived according to the 100 mile diet – that means, we tried to only eat or drink things that grow, are harvested and produced within a range of 100 miles from where we live.

Only regional produce? In January? In the midst of a pandemic? Why on earth would we do that?

The idea behind it is to reduce our carbon foot print by not transporting food over long distances and avoiding water-intensive crops from monocultures destroying biological diversity. So for one week, it meant: goodbye coffee and chocolate, hello milk and honey.

Read on to find out about our experiences:

Our goal was to eat only stuff that came from less than 100 miles around our house. So for that we had to start by shopping. We started by going to the super U of the village (...) After this we went to a farm near my house (…), but we didn’t find any meat so we had to travel to another farm. In all, this expedition to find food took us about 4 and a half hours, but I had everything I needed to eat for a week only with local things.

It was difficult to look for the regional food and drinks in the shops and not to be tempted to buy something I probably would have bought normally.

I noticed that eating local costs more, because its often better quality and also not from a large distributor. This challenge made me realize that as buying in the supermarket became a habit, we forgot the local food and little shops of our village or city.

When I spoke about this challenge to my neighbors, they showed me a website that I didn't know but it's quite REVOLUTIONARY!! The name is: Frais et local (https://www.fraisetlocal.fr). It's really good!

I think, potatoes are THE thing which make the challenge so easy. We have 20 kg in our cellar from a local grower. With potatoes you can make every meal eatable because you can do so many things with them. For example,I made some Röstis, baked potatoes or just ate potatoes with something else.

This challenge helped me to know a little bit more about the season of fruits and vegetables and also obviously where they come from. I’ve eaten a lot of apples, a lot of cabbages sorts and most of all hand cooked meals so that I could be sure that all the ingredients I’ve used really come from my region. What I can also add to this is that I ate a lot of traditional food like “choucroute” that comes from Alsace or “Kaesespaetzle” and a lot of cheese: “comté”, “munster”...

What I found nice about the challenge is that you become creative. You must invent new menus or think about what you can eat or not. I wanted, for example, to drink hot beverages like tea but I didn‘t find teas which are local, and local herbs are rare in winter. So I thought about it and I had the idea to use the thyme of our garden for tea.

I failed every day, right after getting up because I could not do without a cup of coffee to get awake.

The difficulties of this challenge were to me not to consume rice and exotic fruits! I could also say that not to drink coffee also was difficult, but I have to admit that this made me fail the challenge. Coffee helps me to start my day with energy and I didn’t find anything to replace it, unfortunately.

Breakfast was the most difficult for me because I always take some chocolate spread which doesn’t come from within 100 miles for sure. My mom also decided to take part in the challenge by cooking some things herself like bread. Where I failed is of course the breakfast, my mom’s bread was of course excellent but on  Wednesday I woke up lately so I had to take a breakfast really fast before the online German class and under the little stress I completely forgot the challenge and I ate my favorite chocolate spread.

The product I most missed is chocolate!!!! Because there are no cocoa trees in our region, we couldn’t buy local chocolate!! And my family ate some for the gouter, I was like so JEALOUSSS of their snacks in contrast to mine: the eternal and timeless apple :)

I obviously had a lot less sugar than usually and, as scientists say, sugar is a source of happiness. Therefore I had to find other things to make me happy last week!

What was difficult was that I had to stick to this diet and if we had had school, that would have been even more difficult (because I don’t have the possibility to eat at home during school weeks).

I caused a lot less plastic waste this week because all I bought was either from the farmer's market or it comes in glass bottles or jars, with a few exceptions (butter wrapper, plastic wrap for the cheese etc).

If you accept to eat only the seasonal food, it would be very helpful to protect the environment. Nevertheless, I thing that its good to still buy special food from far away places because it comes from there and it gives jobs to the people in these countries. For example coffee : it is difficult to make coffee in Europe and it is good that it comes from Peru, for example, because it helps the people there to live on something.

Those who eat regionally also counteract factory farming. If you buy your meat from local farmers, you know that the animals live in good conditions and thus also do less harm to the environment. In addition, the meat of these animals is usually not transported very far - so here, too, you can do the environment a favour.

In my opinion this diet really helps to raise awareness, that you can buy many things from local producers and that those are as good (and often even better in quality and more healthy) than goods from big industrial brands. Also it shows us, that whilst cooking with seasonal fruits and vegetables you can still make a good menu.

We don't have to give up everything else, and we can work towards environmentally friendly transport routes.

What I noticed during this week is that a lot of food that we had already eaten where from the local farmers and butchers.

Buying locally is environmentally friendly and should not only be part of a challenge but should be part of everyday life.

In winter there is a lot less different food (unlike in summer) and food shouldn’t be that monotonous for me.

The only negative point in this challenge was to find all the stuff to eat, because it often says on the stuff that it is from Alsace but in fact it is made somewhere else in France.

The main thing is, in my opinion, the quality, local tastes mostly better than imported things, if you focus on raw materials such as meat, vegetables and fruit.

Coffee and chocolate cannot be produced in Germany, and, frankly, I would not want to do without them. Because of that I do not consider the diet a good alternative.